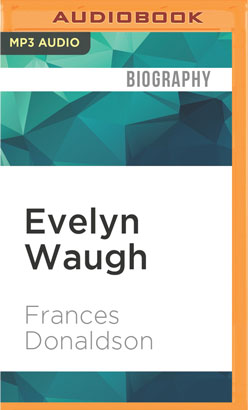 In his lifetime, Evelyn Waugh’s personality and his attitude to the postwar world aroused almost as much controversy as his works did admiration. It is with Evelyn Waugh, the man as she knew, him that Frances Donaldson is principally concerned. His own autobiography covered the first 25 years of his life. The perceptive, affectionate and often vividly illuminating study starts in 1948 and describes their various meetings until his death in 1966. Frances Donaldson describes the writer as family man, friend, host, and country neighbour. We also see him living through the alarming experience which he so brilliantly transposed into the ordeal of Gilbert pinfold, winning his libel action against Nancy Spain, visiting his children at school, shopping for antiques and writing letters and characteristically crisp and succinct postcards. The man who emerges from these pages will amaze and delight those who admired his work but did not know him personally.

Lady Donaldson of Kingsbridge (1907-1994), a British writer and biographer, was the daughter of Freddie Lonsdale, a playwright. She married John George Stuart Donaldson, Baron Donaldson of Kingsbridge (known as Jack), a left-wing intellectual, social worker, and dilettante Gloucestershire farmer, in 1935. As the daughter of the playwright Frederick Lonsdale, she grew up in the frivolous world of 1920s café society, yet she became a committed socialist. As the wife of Lord Donaldson who was on the board of both London Opera houses and was subsequently Minister for the Arts, Frances Donaldson was at the cultural centre of British life. Her body of work included topics such as farming, and biographies on writers Evelyn Waugh and P. G. Wodehouse, as well as on her father, Freddie. Her biography of King Edward VIII won the Wolfson Literary Award and was the basis for a six-part television series Edward and Mrs. Simpson, starring James Fox and Cynthia Harris.