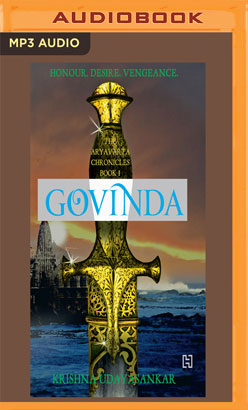 Aryavarta, the ancient realm of the noble. For generations the Firstborn dynasty of scholar-sages, descendants of Vasishta Varuni and protectors of the Divine Order on earth, has dominated here. For just as long, the Angirasa family of Firewrights, weapon-makers to the kings and master inventors, has defied them. In the aftermath of the centuries-long conflict between the two orders, the once-united empire of Aryavarta lies splintered, a shadow of its former glorious self. Now the last Secret Keeper of the Firewrights is dead, killed by a violent hand, and the battle for supreme power in the empire is about to begin.

As mighty powers hurtle towards a bloody conflict, Govinda Shauri, cowherd turned prince and now Commander of the armies of Dwaraka, must use all his cunning to counter deception and treachery if he is to protect his people and those whom he loves. But who holds the key to the fantastic and startling knowledge of the Firewrights, which in the wrong hands will bring doom upon the empire? And does Govinda have it in him to confront the dark secrets of his past and discover the true meaning of being Arya, of being noble?