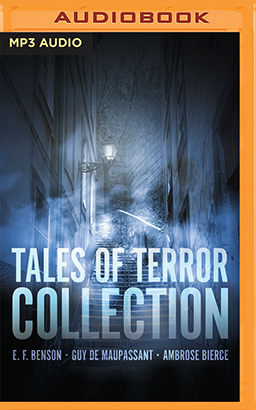 A Night in Whitechapel, Was It a Dream?, Caterpillars, John Mortonson's Funeral

“Night in Whitechapel”
French short-story master Guy de Maupassant offers this chilling look into one of the world’s best known cities. When two young men make a trek to London on a cold December evening, they expect to take in the city and maybe a pub or two along the way. But a chance encounter with a mysterious woman soon has them questioning not only the proceedings of their evening but their sanity as well.

“Was It a Dream?”
Guy de Maupassant once again delivers a spine-tingling narrative. A young man recounts the tragic death of his love, claimed by an unknown illness. In his grief, he wanders the cemetery where she is buried to find a dark secret that she, and many other corpses, share.

“Caterpillars”
Stories of the supernatural from E.F. Benson have been terrifying audiences for decades—even making the transition to television adaptation. In “Caterpillars,” a man recalls his terrifying stay at a haunted Italian villa. You will never look at caterpillars in the same way.