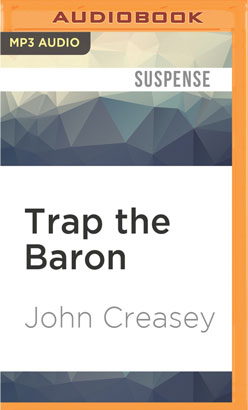 When John Mannering - alias the Baron - picked up the receiver he heard a frightened man at the end of the line. When he later opened his front door he found a superbly confidant and supremely beautiful woman standing there. She had been robbed of diamonds and she needed Mannering's help. Were the two linked?

As the story unfolds it consumes Mannering's friends and enemies, and sees the Baron and his wife put in grave danger. As the tension increases and time ticks by, Mannering must use his wits to escape the trap by which he has been ensnared and in which he might ultimately perish.

Master crime fiction writer John Creasey's near 600 titles have sold more than 80 million copies in over 25 languages under both his own name and multiple other pseudonyms. His style varied with each identity and led to him being regarded as a literary phenomena. Amongst the many series written were Gideon of Scotland Yard, The Toff, The Baron, Dr. Palfrey and Inspector West, as JJ Marric, Michael Halliday, Patrick Dawlish and others.