Hint of Strangeness, A 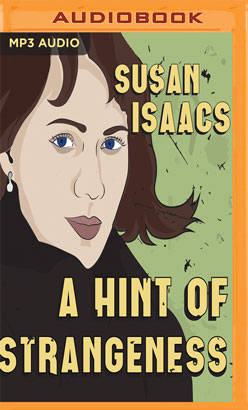 Hint of Strangeness, A

The Washington Post said, "Nobody does smart, gutsy, funny, sexy women better than Susan Isaacs". Add to that praise the adjective "strong", and you've got Susan's latest protagonist, Marianne Kent. Her life may not seem thrilling - living with her widowed mother, majoring in economics, working in an elegant dress store after classes to put away money for graduate school - but she's determined to make a better life for herself and her mom.

One night, she comes home to see the light is out again over the door. That old fuse box? Again? Except when Marianne gets inside, she stumbles over something, and it's immediately clear what has happened: Her mother has been murdered. The NYPD is stumped. Marianne's father, an army captain, was killed in battle when she was a year old, and whatever other family she has are so distant she's never met them. Whom can she turn to? Marianne does what strong women always do: She turns to herself. With help from Laurie Fishbein, her BFF since second grade, she becomes her own private detective to solve the case of her lifetime.

Susan Isaacs was dubbed "Jane Austen with a shmear" on NPR's Fresh Air. Among her 13 novels are Almost Paradise, Shining Through, and After All These Years. She has written screenplays for two films, Compromising Positions (adapted from her novel) and Hello Again, as well as a nonfiction work, Brave Dames and Wimpettes: What Women Are Really Doing on Page and Screen. Currently, she serves as chairman of the literary organization Poets & Writers.

A member of the National Book Critics Circle, she has reviewed for New York Times, the Los Angeles Times, the Chicago Tribune, the Washington Post, and Newsday. She is a past president of Mystery Writers of America and belongs to the Creative Coalition, PEN, and the International Association of Crime Writers. Susan is a trustee emerita of the Queens College Foundation and on the board of the Jewish Theological Seminary. Among her honors are the John Steinbeck award, the Writers for Writers award, and the Marymount Manhattan Writing Center prize. She has worked gathering support for the National Endowment of the Arts Literature Program and on many anticensorship campaigns. She lives on Long Island, where she's at work finishing her new novel, Violet Hopkins.