Cry for the Baron 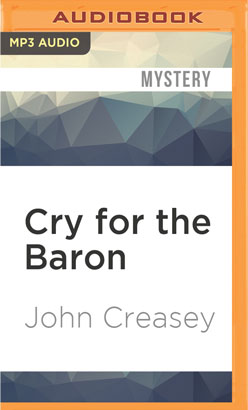 Cry for the Baron

The Diamond of Tears had a murderous history. Four people had owned it and each one had been tortured and brutally murdered. When Jacob Bernstein acquired it, he was to become the fifth victim. This death plunges the Baron into a mystery filled with both danger and intrigue, at its root a priceless jewel. The Baron must solve it or die.

Master crime fiction writer John Creasey's near 600 titles have sold more than 80 million copies in over 25 languages under both his own name and multiple other pseudonyms. His style varied with each identity and led to him being regarded as a literary phenomena. Amongst the many series written were "Gideon of Scotland Yard", "The Toff", "The Baron", "Dr. Palfrey" and "Inspector West", as JJ Marric, Michael Halliday, Patrick Dawlish and others.