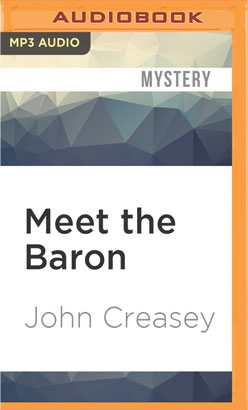 John Mannering (aka “the Baron”) makes his first appearance in this volume. Lord Fauntley cannot help showing off both his daughter and the security under which his precious jewels are kept. Mannering finds himself attracted to both. Money is tight and so he plans a burglary, but this fails and unexpected consequences result. The relationship with Lorna Fauntley flourishes, and a series of high-profile thefts and adventures ensure Mannering’s future, so he believes, until Lorna equates him with the Baron. One of the many further twists in this award-winning novel occurs when the police appear to seek Mannering’s help, only to have everything turned upside down as the plot develops.

Master crime fiction writer John Creasey’s near six hundred titles have sold more than eighty million copies in over 25 languages under both his own name and ten other pseudonyms. His style varied with each identity and led to him being regarded as a literary phenomenon. Among the many series written were Gideon of Scotland Yard, The Toff, The Baron, Dr. Palfrey, and Inspector West, as J.J. Marric, Michael Halliday, Patrick Dawlish, and others. During his lifetime, Creasey enjoyed an ever-increasing reputation both in the UK and overseas, especially the US. He was honored twice by the Mystery Writers of America, latterly as Grand Master. He also founded the Crime Writers Association and became heavily involved in British politics, standing for Parliament and founding a movement based on finding the best professionals in each sphere to run things.