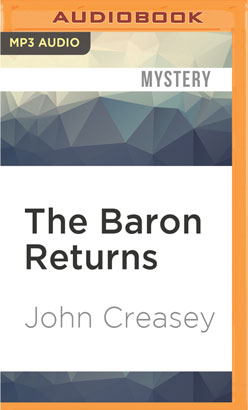 This is the story of Baron before he became simply John Mannering. Working as a modern day Robin Hood, The Baron is one of Scotland Yard’s, and in particular Detective-Superintendent William Bristow’s, most hated but respected robbers. The press can’t get enough of him, the public are intrigued and quickly the legend is born.

'The King of Crime' wrote an astonishing number of crime and mystery books, selling more than 80 million copies worldwide in 28 languages over five decades. His most famous characters include The Baron, Inspector West, and Gideon. The Creasey Dagger is the UK's top award for first time crime novelists with winners including Patricia Cornwell and Minette Walters. Creasey is an inspiration to the aspiring but as yet unpublished author. He had 743 rejection slips before his first book was accepted. He never stopped believing in himself and he never gave up. He wasn't afraid to take risks either—writing under 10 different names and changing styles with each character.