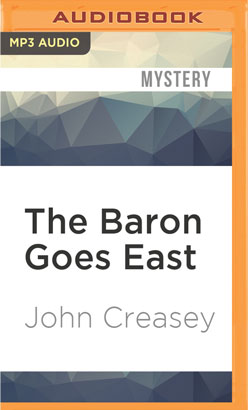 The Maharajah of Ganpore had a collection of blue diamonds to sell, so it wasn't surprising that John Mannering—alias the Baron—was making his way to India to start the bidding. But some people had other plans for the diamonds. The Bundi, a group of fanatical patriots, intend to deal with the dealers in no uncertain terms, and the Baron soon finds himself bidding for his life.

Master crime fiction writer John Creasey's near 600 titles have sold more than 80 million copies in over 25 languages under both his own name and multiple other pseudonyms. His style varied with each identity and led to him being regarded as a literary phenomenon. Amongst the many series written were 'Gideon of Scotland Yard', 'The Toff', 'The Baron', 'Dr. Palfrey' and 'Inspector West', as JJ Marric, Michael Halliday, Patrick Dawlish and others.