Baron at Bay, The 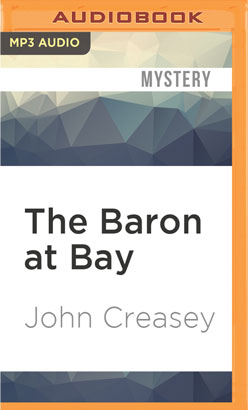 Baron at Bay, The

Once the inheritance of a noble family, the five beautiful jewels of Castille were stolen, separated and their identity lost. Few men could recognize them for what they were, but John Mannering ' alias the Baron ' was such a man. In pursuit of jewels, Mannering has the misfortune to come up against three of the ugliest criminals he has ever met. To these men, robbery and violence are merely a game, and the Baron an inconvenient pawn who must fight for his life as well as the prize.

Master crime fiction writer John Creasey's near 600 titles have sold more than 80 million copies in over 25 languages under both his own name and over 25 other pseudonyms. His style varied with each identity and led to him being regarded as a literary phenomena. Amongst the many series written were Gideon of Scotland Yard, The Toff, The Baron, Dr. Palfrey and Inspector West, as JJ Marric, Michael Halliday, Patrick Dawlish and others.