Ending I Want, The 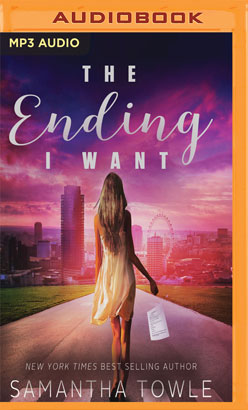 Ending I Want, The

Taylor Shaw had the perfect life—until she was 16. That was when everything changed. From that moment on, life went from bad to worse...to the worst. After recovering from a brain tumor, months later, she suffers the tragic loss of her whole family.

Since that fateful day, she's been coasting through life.

Now the brain tumor has returned, and Taylor decides she's had enough. She's going to take her fate into her own hands. No more hospitals. No more surgeries. No more anything.

She's going to join her family.

It's her decision. What she longs for. The ending she wants.

She just has a list of things to do before she goes. First, go to England. Second, kiss a stranger.... Only Taylor didn't expect Liam Hunter, the stranger—with his handsome face, his six-foot-three of gorgeousness, and his oh-so-hot English accent—to change things. To change her. To change the ending she wanted.

What is a girl who is standing on the edge of nothing to do when offered the chance of everything?