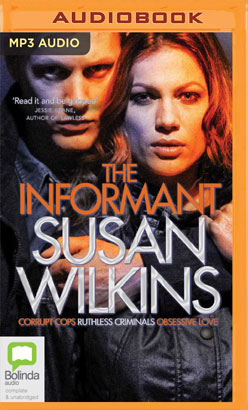 Set in London and Essex, The Informant is a story of ruthless criminals, corrupt cops, obsessive love and the villainy that operates on both sides of the law.

As a drug-fuelled teenage tearaway, Kaz Phelps took the rap for her little brother, Joey, over a bungled armed robbery, and went to jail. Six years later she's released on licence. Clean and sober – and driven by a secret passion for Helen, her lawyer – Kaz wants to escape the violence and abuse of her Essex gangster family.

Joey is now a charming, calculating and cold psychopath. He worships the ground his sister walks on and he's desperate to get her back in the family firm. But all Kaz wants is a fresh start and to put the past behind her. When Joey murders an undercover cop, DS Nicci Armstrong is determined to put him behind bars. What she doesn't realise is that their efforts are being sabotaged by one of their own.

The final test for Kaz comes when her cousin, Sean, gets out of jail. A vicious, old-school thug, he wants to put the girl back in her place. But can Kaz face him down and get her life back?

'An excellent read that is well plotted and unflinchingly told.'
Sunday Express

'Brings a freshness to the milieu that is particular and distinct.'
Daily Mail