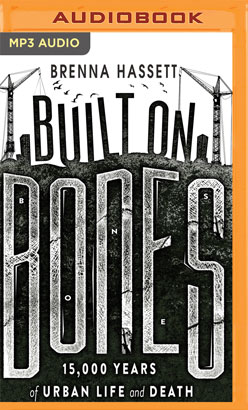 The city has killed most of your ancestors, and it's probably killing you, too - this book tells you why.

Imagine you are a hunter-gatherer some 12,000 years ago. You've got a choice - carry on foraging or plant a few seeds and move to one of those new-fangled settlements down the valley. What you won't know is that urban life is short and riddled with dozens of new diseases; your children will be shorter and sicklier than you are; they'll be plagued with gum disease and stand a decent chance of violent death at the point of a spear. Why would anyone choose this?

But choose they did. Why? This is one of the many intriguing questions tackled by Brenna Hassett in Built on Bones. Based on research on skeletal remains from around the world, this book explores the history of humanity's experiment with the metropolis and looks at why our ancestors chose city life and, by and large, have stuck to it. It explains the diseases, the deaths and the many other misadventures that we have unwittingly unleashed upon ourselves throughout the metropolitan past and, as the world becomes increasingly urbanised, what we can look forward to in the future.

Built on Bones offers accessible insight into a critical but relatively unheralded aspect of the human story: our recent evolution. It tells the story of shifts in human longevity, growth and health that have occurred as we transitioned from a mobile to a largely settled species. Beginning with the very earliest experiments in settling down, the narrative moves slowly forward in time, with each chapter discussing a new element of humanity's great urban experiment.