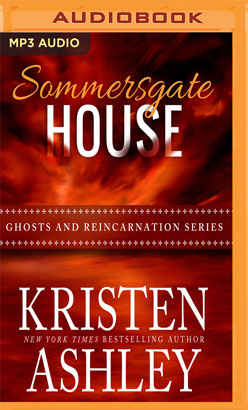 Douglas Ashton is the cold and unfeeling owner of the gothic Victorian Mansion, Sommersgate House. Julia Fairfax is his stubborn American sister-in-law. After tragedy strikes, Douglas and Julia are forced to live together at Sommersgate and raise their newly orphaned nieces and nephew.

Douglas has no desire to raise his dead sister's children, nor does he want the distraction of the tempting Julia living under his roof. Julia is struggling with grief and trying to make a go in a new country without much help from impossibly handsome, but even more impossibly remote Douglas. Not to mention, she has to deal with the active hostility of Douglas's frosty, Attila-the-Hun-in-a-skirt mother, Monique. Douglas decides the best way to give the children what they need, get his mother to behave, and give himself what he wants is to marry Julia. When he tells her (yes, tells her) she will be his wife, Julia thinks Douglas is (probably) insane. And anyway, she's decided if she ever has another husband (since the last one wasn't so great), he was going to be short, balding, have a paunch, and worship the ground she walks on (none of these characteristics define Douglas in the slightest).

One more thing, Sommersgate House is haunted by the ghosts of the man who built the house and the woman who was the love of his life. They both died mysteriously at Sommersgate months after it was finished. When they did, a curse settled on the house, making it seem strangely alive. And the only way for the beautiful but frightening house to rid itself of this curse is for its owner to find true love.