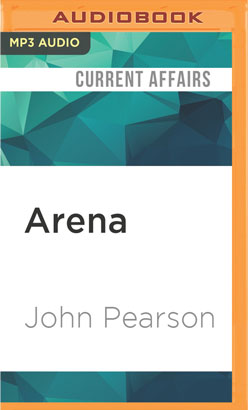 In the Year AD 80 the Colosseum opened with quite the longest and most nauseating organized mass orgy in history. It was a mammoth celebration on the grandest scale, a fitting inauguration for an arena built to epitomize all the majesty and power of the Roman Empire, a building which also held the seeds of that Empire's decay and destruction. As well as his vivid account of the erection of the Colosseum, Mr Pearson discusses the origins of death spectacles and their evolution into highly organized games intended to enhance imperial prestige and provide the populace with an effective substitute for politics and war.

'Butchered to make a Roman holiday', the victims of this lust for slaughter were slaves and criminals, the human surplus of their day, coached for an almost certain death. One chapter highlights the perverted death-wish of many early would-be martyrs and decisively establishes that there is no evidence for the death of a single Christian martyr in the Colosseum. The audiobook concludes with a brief survey of the building's subsequent history; looted and despoiled yet still the embodiment of Rome's spirit and greatness, it became a sublime romantic ruin, now exposed by slum-clearance as a gigantic traffic island.

Mr Pearson is acutely aware of the violence that was endemic in Roman society, and in his shrewd analysis he draws disturbing parallels with the twentieth-century situation. John Pearson became interested in the Colosseum and the whole nature of Roman violence when researching his book The Profession of Violence-an account of recent gangsterism in London's East End. An experienced journalist and winner of the Author's Club award for the best first novel of 1963 Gone to Timbuctoo, he has also written The Life of Ian Fleming and Bluebird and the Dead Lake.