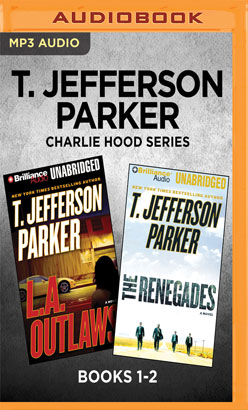 L.A. OUTLAWS
Los Angeles is gripped by the exploding celebrity of Allison Murietta, her real identity unknown, a modern-day Jesse James with the compulsion to steal beautiful things, the vanity to invite the media along, and the conscience to donate much of her bounty to charity. Nobody ever gets hurt - until a job ends with ten gangsters lying dead and a half-million dollars worth of glittering diamonds missing. Rookie Deputy Charlie Hood discovers the bodies, and he prevents an eyewitness - a schoolteacher named Suzanne Jones - from leaving the scene in her Corvette. Drawn to a mysterious charisma that has him off-balance from the beginning, Hood begins an intense affair with Suzanne. As the media frenzy surrounding Allison’s exploits swells to a fever pitch and the Southland’s most notorious killer sets out after her, a glimmer of recognition blooms in Hood, forcing him to choose between a deeply held sense of honor and a passion that threatens to consume him completely. With a stone-cold killer locked in relentless pursuit, Suzanne and Hood continue their desperate dance around the secrets that brought them together, unsure whether each new dawn may signal the day their lies catch up with them.

THE RENEGADES
Some say that outlaws no longer exist, that the true spirit of the American West died with the legendary bandits of pulp novels and bedtime stories. Charlie Hood knows that nothing could be further from the truth. These days he patrols vast stretches of the new American West, not on horseback but in his cruiser. The outlaws may not carry six-shooters, but they’re strapped all the same. Along the desolate and dusty roads of this new frontier, Hood prefers to ride alone, and he prefers to ride at night. At night, his headlights illuminate only the patch of pavement ahead of him: all the better to hide from the demons—and the dead outlaws—receding in his rearview mirror. But he doesn’t always get what he wants—certainly not when he’s assigned a partner named Terry Laws, a county veteran who everyone calls “Mr. Wonderful.” And not when Laws is shot dead in the passenger seat and Hood is left to bear witness to someone who knew that Mr. Wonderful didn’t always live up to his nickname. As he sets out to find the gunman, Hood knows one thing for sure: The West is a state of mind, one where the bad guys sometimes wear white hats—and the good guys seek justice in whatever shade of gray they can find it.