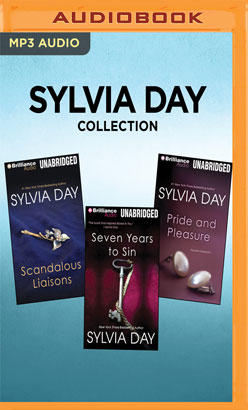 SCANDALOUS LIAISONS
Dear Listener, In 2004, I was chosen as the Readers’ Choice winner of the Lori Foster Brava Novella Contest with my entry, “Stolen Pleasures,” which you’ll find inside this audiobook. Kensington published the winning entry in what became my debut release, Bad Boys Ahoy! Since then, Kensington and I have released eight other novels (and another anthology), with more on the way, but a writer’s first book always holds a special place in his or her heart. I’m thrilled that Bad Boys Ahoy! has now been updated with a new title — Scandalous Liaisons — and a new cover, with the award-winning stories inside remaining just as they were first written. If you’re just discovering Lucien, Sebastien, and Hugh for the first time, I hope you love them as much as I do. And if you’ve fallen in love with them before, I hope you do so again. All my best, Sylvia

SEVEN YEARS TO SIN
A young man forced to sell his body for money. A young lady who watched him do it. Two tormented souls brought together years later to assuage the hunger of a desperate, irresistible attraction… With lush sensuality and unerring insight, Sylvia Day explores the underpinnings of intimacy and desire.

PRIDE AND PLEASURE
WEALTH HAS ITS DANGERS...SO DO CERTAIN MEN Jasper Bond turns (female) heads wherever he goes. He can’t dance, isn’t known for his restraint, and his blood heats whenever he’s near his latest employer, the unwittingly sexy Eliza Martin. She insists no one will believe an intellectual like her could be seduced by a man of action like Jasper, but the combination of his desire and her mystery makes the case one he can’t resist. Client satisfaction is a point of pride and it’s his pleasure to prove he’s just the man she needs after all....