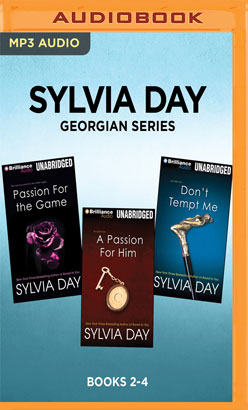 PASSION FOR THE GAME
Infamous for satisfying his limitless wants and desires, Christopher is a free man again. And this time he’s on a mission to engage, deceive and seduce the one woman as ruthless as he is when it comes to dangerous games of passion.… Far from innocent in the ways of men, Maria is one step ahead of Christopher’s every move. It doesn’t mean she isn’t enjoying every delicious look, every unbridled kiss, every moment of abandon. Neither of them could have imagined the moment when they would meet their match—or that they would surrender to each other again and again.…

A PASSION FOR HIM
He wears a mask…and he is following her. Staring at her like no other man since Colin. But Colin is dead and Amelia believes she will never again shiver with pleasure, never again sigh his name. Until her masked pursuer lures her into a moonlit garden and a single, reckless kiss. Now she is obsessed with discovering his identity. Perfectly attuned to his every desire, his every thought, she will not stop until she knows his every secret.

DON'T TEMPT ME
A hardened mercenary as adept in bed as in battle, Simon Quinn can have any woman he wants, but he prefers those who know the rules of the game. That way it’s easier to leave them behind… But Lysette Rousseau is one female he can’t figure out. Beautiful, sensual, seductive, she should be the perfect match for Simon, yet something about her ties him in knots. Bold and manipulative one time, sweetly innocent the next, she is an enigma bound to bring trouble… impossible to resist.