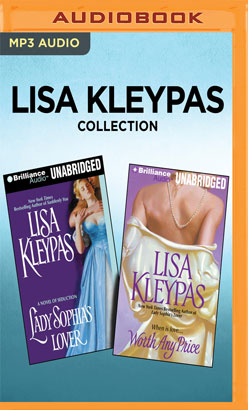 LADY SOPHIA’S LOVER
Lady Sophia Sydney would do anything to ensnare the unattainable Sir Ross Cannon. Her goal—to ruin his reputation and cause a scandal that would be the talk of all London. So she insinuates herself into his life by gaining his trust and living in his house. Every morning, her lush presence tempts him beyond all reason...the way she bends over the table to serve him the meals she has prepared...the way her hands oh, so gently—yet sensuously—brush against him. Every night, she promises with her eyes—and her body—that the hours before dawn could be spent in unbridled passion instead of restless sleep—if only he’d let her share his bed. She knows he is falling more in love with her each day. But she never counted on falling in love with him. And she never dreamed he might very respectably ask for her hand in marriage....

WORTH ANY PRICE
Nick Gentry is reputed to be the most skillful lover in all England. Known for solving delicate situations, he is hired to seek out Miss Charlotte Howard. He believes his mission will be easily accomplished—but that was before he met the lady in question. For instead of a willful female, he discovers one in desperate circumstances, hiding from a man who would destroy her very soul. So Nick shockingly offers her a very different kind of proposition—one he has never offered before. He asks her to be his bride. And he knows that this will be much more than a union in name only. For he senses what Charlotte does not yet know—that her appetite for sensuality matches his own. But what Nick learns surprises him. For while London’s most notorious lover might claim Charlotte’s body, he quickly discovers it will take much more than passion to win her love.