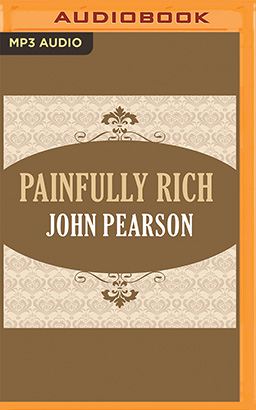 J. Paul Getty and His Heirs

Oil tycoon J. Paul Getty created the greatest fortune in America—and came close to destroying his own family in the process. Of his four sons who reached manhood, only one survived relatively unscathed. One killed himself, one became a drug-addicted recluse, and the third had to bear the stigma all his life of being disinherited in childhood. The unhappiness continued into the next generation, with the name Getty, as one journalist put it, "becoming synonymous for family dysfunction." Getty's once favourite grandson was kidnapped by the Italian mafia, lost his car and, after a lifetime of drink and drugs, became a paraplegic. A granddaughter is currently suffering from AIDS. And the Getty family itself has been torn apart by litigation over their poisoned inheritance. But did the disaster have to happen?

John Pearson, who has specialized in biographies of families as varied as the Churchills, the British Royal Family, the Devonshires, and the Krays, sets out to find the answer. The result is a fascinating saga of an extraordinary dynasty. He traces much of the trouble to the bizarre character of the avaricious, sex-obsessed billionaire, J. Paul Getty himself—and demonstrates how much of his behaviour has been repeated in succeeding generations. He describes the famous kidnapping of his grandson in graphic detail, revealing how the old man's attitude added considerably to the boy's sufferings. And he shows how the family has coped with the latest modern scourges: drugs and AIDS. But Painfully Rich is not a hopeless story. While some of the family have been damaged by the Getty legacy, others have saved themselves from disaster, most notably the cricket-loving philanthropist, J. Paul Getty Jr. Pearson's moving story of his recovery from drugs and deep personal tragedy shows that there is hope for future generations of this stricken family—and demonstrates that money can be used to buy survival and even happiness.