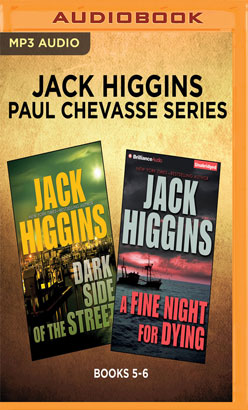 Dark Side of the Street, A Fine Night For Dying

Dark Side of the Street
The Organization was all-powerful, and the Baron’s word was law. A sinister villain’s network, raking profits from all fields of crime. But one man is ready to storm them, and bring “Babylon” crashing down.… For Harry Youngblood, it means finding a new identity. Burying his own criminal past, then finding ways to attack the evil at its roots. Each step brings him closer to betrayal, until there’s only one way left to fight.…

A Fine Night For Dying
Caught in the nets of a local fishing boat, the body of gangland boss Harvey Preston is dragged from the English Channel, wrapped from head to toe in heavy chain. British Intelligence suspects a connection with a cross-channel smuggling ring. But as undercover agent Paul Chavasse embarks on what will be one of the most dangerous cases in his extraordinary career, he soon discovers that this is no small-time operation—and the ruthless men behind it will stop at nothing to protect their precious cargo.