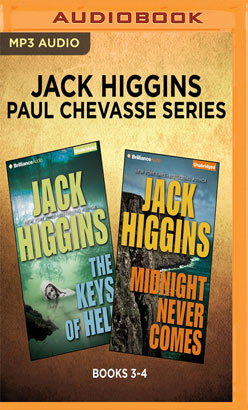 The Keys of Hell
British expatriate Paul Chavasse is about as tough as they come. For years, he has made a dangerous living running men and intelligence across the Adriatic Sea from Italy to the communist country of Albania. But his ideals are about to be tested—more than he ever thought possible. The Albanian government, seeking to crush a religious resurgence within its borders, wants to find and destroy the Madonna of Scutari—a legendary statue of ebony and gold that has protected the faithful for a thousand years. Before government forces capture them, priests hide the carving deep in the marshes along the coast. Now, Paul Chavasse must outrun an entire army in a race to save the priceless relic—and the lives of thousands of believers.…

Midnight Never Comes
Paul Chavasse had everything a good agent needed. Flair, ingenuity, a superb intelligence, common sense – plus a willingness to kill. Now he was part of the walking wounded. So badly hurt on his last mission they figured he was through. But Chavasse was far from through. A few months of special training and he was ready to take on one of the most dangerous men in the world - Max Donner. A millionaire with his own private army and a plan for stealing Britain’s newest secret missile. Paul was ready for Max Donner. But he was not ready for Donner’s beautiful young stepdaughter, Asta.