Guest at the Shooters' Banquet, A 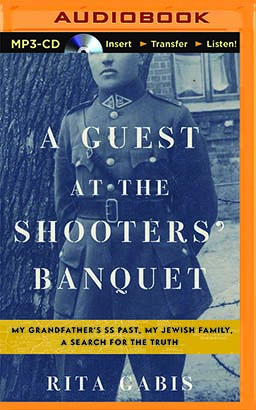 Guest at the Shooters' Banquet, A

My Grandfather's SS Past, My Jewish Family, A Search for the Truth

In prose as beautiful as it is powerful, Rita Gabis follows the trail of her grandfather's collaboration with the Nazis; a trail riddled with secrets, slaughter, mystery, and discovery.

Rita Gabis comes from a family of Eastern European Jews and Lithuanian Catholics. She was close to her Catholic grandfather as a child and knew one version of his past: prior to immigration he had fought the Russians, whose brutal occupation of Lithuania destroyed thousands of lives before Hitler's army swept in.

Three years ago, Gabis discovered an unthinkable dimension to her family story: from 1941 to 1943, her grandfather had been Chief of Security Police under the Gestapo in the Lithuanian town of Svencionys, near the killing field of Poligon, where 8,000 Jews were murdered over three days in the fall of 1941. In 1942, the local Polish population was also hunted down. Gabis felt compelled to find out the complicated truth of who her grandfather was and what he had done.

Built around dramatic interviews in four countries, filled with original scholarship, mesmerizing in its lyricism, A Guest at the Shooters' Banquet is a history and family memoir like no other, documenting "the holocaust by bullets" in a remarkable quest as Gabis returns again and again to the country of her grandfather's birth to learn all she can about the man she thought she knew.