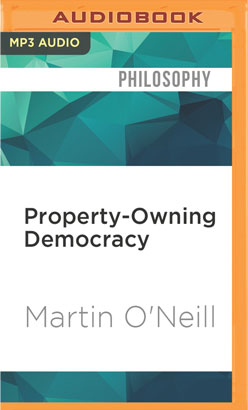 Is social justice possible within capitalist societies? Or should progressives and egalitarians be looking for viable alternatives to free-market capitalism? John Rawls, one of the most influential political philosophers of the last century, advanced the view that social justice is indeed impossible within the constraints of the capitalist welfare state. Rawls believed that familiar capitalist societies in which a small minority holds a massively disproportionate share of wealth could not possibly be just. Instead, he argued that justice requires a different form of socioeconomic organization, one in which human and nonhuman capital is dispersed widely. He called it a "property-owning democracy".

Property–Owning Democracy: Rawls and Beyond presents the first extended treatment of Rawls’ important ideas about the practical implementation of his theory of justice. Contributors to this volume approach Rawls’ idea from a number of perspectives: its philosophical foundations, institutional implications, and possible connections to the future of left-of-center politics. Readings shed new light on a variety of topics, including the inequality of current wealth distribution in advanced capitalist societies; ways of funding a system of universal asset holdings; novel democratic forms of ownership; the link between asset ownership and human capital; and many others. Property-Owning Democracy: Rawls and Beyond offers thought-provoking insights into the concept of social justice in the 21st-century world.

Thad Williamson is associate professor of leadership studies and philosophy, politics, economics and law, University of Richmond. He is the author of Sprawl, Justice and Citizenship: The Civic Costs of the American Way of Life, co-author (with Gar Alperovitz and David Imbroscio) of Making a Place for Community: Local Democracy in a Global Era, and co-editor (with Douglas Hicks) of the upcoming Leadership and Global Justice.