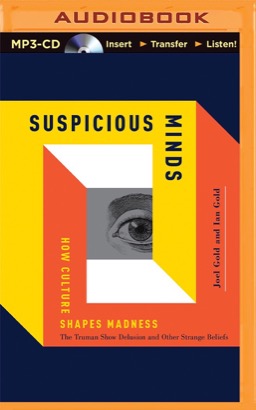 What if you woke up with the alarming suspicion that you were being watched?

One day in 2003, a patient unlike any other that Dr. Joel Gold had seen before was admitted to his unit at Bellevue Hospital. This man claimed he was being filmed constantly and that his life was being broadcast around the world like The Truman Show—the 1998 film depicting a man who is unknowingly living out his life as the star of a popular soap opera. Over the next few years, Dr. Gold saw a number of patients suffering from what he and his brother, Dr. Ian Gold, began calling the “Truman Show delusion,” launching them on a quest to understand the nature of this particular phenomenon, of delusions more generally, and of madness itself.

The current view of delusions is that they are the result of biology gone awry, of neurons in the brain misfiring. In contrast, the Golds argue that delusions are the result of the interaction between the brain and the social world. By exploring the major categories of delusion through fascinating case studies and marshaling the latest research in schizophrenia, the brothers reveal the role of culture and the social world in the development of psychosis—delusions in particular. Suspicious Minds presents a groundbreaking new vision of just how dramatically our surroundings can influence our brains.