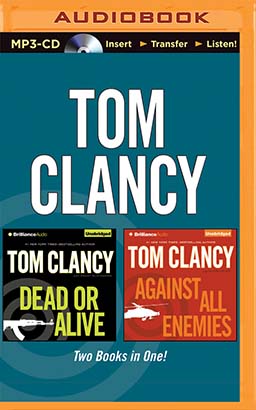 Dead or Alive
Jack Ryan, the former president of the United States, is out of office, but not out of the loop about his brainchild, the “Campus”—a highly effective, counter-terrorism organization that operates outside the Washington hierarchy. But what Ryan doesn’t know is that his son, Jack Ryan, Jr., has joined his cousins, Brian and Dominic Caruso, at the shadowy Campus. While a highly effective analyst, young Ryan hungers for the action of a field agent. The Campus has now turned their sights on the Emir, the number one terrorist threat to western civilization. A reclusive figure and mastermind of vicious terrorist acts, the Emir has eluded capture by the world’s law enforcement agencies. But now—with the help of ex-CIA agent John Clark and protégé Marine Colonel Ding Chavez—the Campus is in on the hunt. The mission: to bring the Emir in—dead or alive.

Against All Enemies
For years, ex–Navy SEAL Maxwell Moore has worked across the Middle East and behind the scenes for the Special Activities Division of the CIA, making connections, extracting valuable intelligence, and facing off against America’s enemies at every turn. And then...news of a potentially devastating coalition: What if two of the greatest threats to the security of the United States were to form an unholy alliance? The Taliban is trying to exploit a Mexican drug cartel to which they supply opium as a means to bring the fire of jihad to the hearts of the infidels. It is up to Moore, and his team, to infiltrate and dismantle the drug cartel, even as they hunt for those who would bring the ultimate terror and destruction to the streets of America. In a story that races from the remote, war-scarred landscapes of the Middle East to the blood-soaked chaos of the U.S.-Mexico border, Tom Clancy once again delivers a heart-stopping thriller that is frighteningly close to reality.