Nest Egg for the Baron 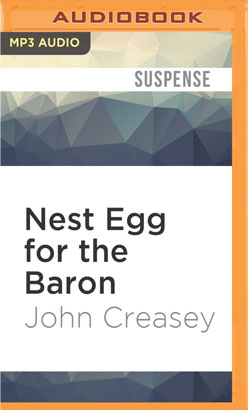 Nest Egg for the Baron

Five jewelled eggs in a golden nest sat in the strong room of Quinn’s on Bond Street. Outside, John Mannering - alias the Baron - guarded the treasure for his clients - an ugly old man and his stunningly beautiful niece. While Miranda Smith waited in the showroom, her uncle took a taxi to the bank to procure proof of ownership. But Pendexter Smith has not returned, and Mannering has a problem on his hands - Miranda is deaf, deaf and is a state of severe shock. The events that follow are enough to make even the Baron nervous. Attempted burglary, murder, and threats against his life leave Mannering battling for survival in this thrilling tale.

Master crime fiction writer John Creasey's near 600 titles have sold more than 80 million copies in over 25 languages under both his own name and multiple other pseudonyms. His style varied with each identity and led to him being regarded as a literary phenomena. Amongst the many series written were ‘Gideon of Scotland Yard', 'The Toff', 'The Baron', 'Dr. Palfrey' and 'Inspector West', as JJ Marric, Michael Halliday, Patrick Dawlish and others.