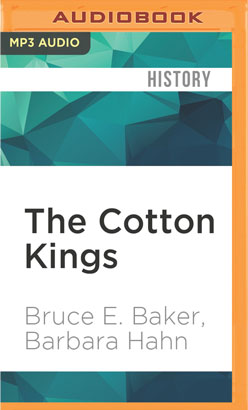 In the second decade of the 21st century, many Americans feel they are subject to economic forces beyond their control. Some critics of today's economy compare it to the rampant inequality of the late 19th century, when robber barons manipulated the economy to their own benefit. Others object to the remedies that were applied in the early 20th century, insisting that markets work best when governed least. The Cotton Kings relates a colorful economic drama with striking parallels to contemporary American economic debates.

At the turn of the 20th century, dishonest cotton brokers used bad information to lower prices on the futures market, impoverishing millions of farmers. To fight this corruption, a small group of brokers sought to control the price of cotton on unregulated exchanges in New York and New Orleans. They triumphed, cornering the world market in cotton and raising its price for years. However, the structural problems of self-regulation by market participants continued to threaten the cotton trade until eventually political pressure inspired federal regulation. In the form of the Cotton Futures Act of 1914, the federal government stamped out corruption on the exchanges, helping millions of farmers and textile manufacturers.

Combining a gripping narrative with the controversial argument that markets work better when placed under federal regulation, The Cotton Kings brings to light a rarely told story that speaks directly to contemporary conflicts between free markets and regulation.