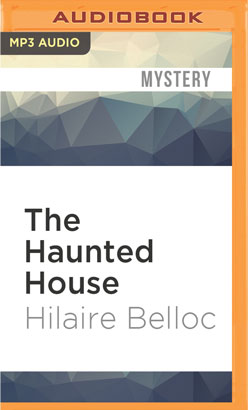 Readers of The Emerald of Catherine the Great will not have to be told that Mr. Belloc's mystery stories are written with suavity and originality and an eye for piquant situations. This new mystery tale is the story of Rackham Catchings, a manor house in Sussex belonging to an amiable but improvident squire, which in payment of a debt has come into the possession of his brother. How the squire's son, John, is forced to earn his living as a ventriloquist in the music halls, how ventriloquism plus a headless ghost sends the household into a frenzy of excitement and fear, and how John succeeds in recovering his home and winning the girl he loves make a constantly unexpected and unusual story.

Hilaire Belloc (1870- 1953) was born in La Celle-Saint-Cloud, France, and raised in England. Educated in Birmingham before voluntarily serving his military term of service in France, Belloc then returned to England to study History at Baliol College, Oxford where he graduated with a First class degree. Writing on everything from poetry to war and travel in between, Belloc has been called one of the Big Four of Edwardian Letters, along with H.G. Wells, George Bernard Shaw, and G. K. Chesterton, all of whom debated each other into the 1930s. Belloc was closely associated with Chesterton, and Shaw coined the term Chesterbelloc for their partnership. A deeply religious Catholic, Belloc wrote considerably about his faith, and throughout his literary career he was concerned with the problems of social reform. He was a political activist and an MP for Salford from 1906 to 1910 for the Liberal party, and his written non-fiction work criticized both capitalism and aspects of socialism.