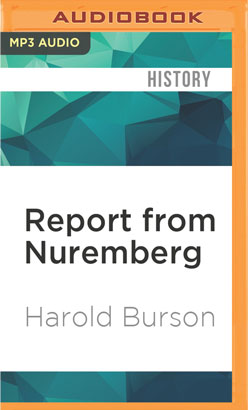 Audible brings to life through dramatic performance the 1945-1946 radio broadcast reports covering the greatest courtroom drama of the 20th century—the Nuremberg trials. The original broadcasts have been lost forever, but the verbatim text—written by Harold Burson, founding chairman of one of the world's leading public relations firms, Burson Marsteller, who at the time was a reporter for the Armed Forces Network—has been newly interpreted by an ensemble of some of our fine actors. This original production, published here for the first time and only in audio, blends journalism, history, re-enactment and performance, and reimagines what it was like to experience first-hand this groundbreaking trial and to witness close-up some of the most infamous figures in recent world history: members of the Nazi ruling class. The production is being released on the anniversary of the opening of the first and most famous trial, November 19, 1945.