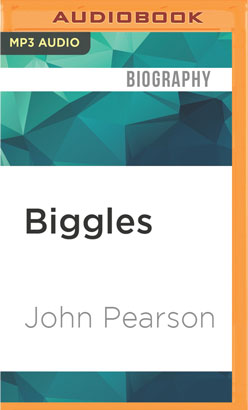 For over 50 years James Biggles Worth, D.S.O., D.F.C., M.C., has flown the skies. The mythical ace to end all flying aces, the fearless pilot of everything from Sop with Camels to the earliest jets, he emerged with glory from devilish scrapes all over the world. Yet until now Biggles has often been seen as a storybook caricature. A dashed fine chap, certainly. But not the extraordinary man he really was. Here, for the first time, is an insight into the 'real' man who made these adventures possible. John Pearson has unravelled the missing strands in Biggles' life; delving vigorously into subjects that were once taboo.

Why did Biggles never marry? What was the truth about his tragic first love? And what were Biggles' real regrets and frustrations as he tried to come to terms with a rapidly developing world in peacetime? The truth—so long hidden behind a stiff upper lip and an equally stiff pink gin in the Officers' Mess—is at last revealed.

John Pearson was born in 1930, and educated at King's College School, Wimbledon and Peterhouse, Cambridge, where he read history. He has worked on various newspapers, including the Economist, The Times, and the Sunday Times where for a time he wrote the Atticus column. After the success of his Life of Ian Fleming, he decamped with wife and family to Rome, where he lived for some years. Mr Pearson returned to England to research and write the life and times of the Kray brothers.