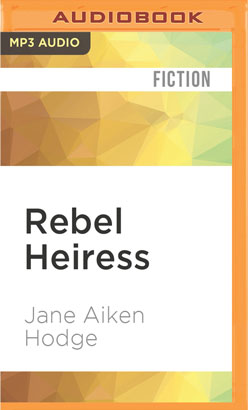 Henrietta was no one's enemy. She came to London from Boston in search of her father—a father thought lost to her until she discovered her aunt's treachery. Now armed with her mother's marriage papers, she set sail for England to prove her identity and, unknowingly, to gain a fortune—and a love—she had never dreamed of. Henrietta was too beautiful to ignore. Her wealthy father was enchanted with her. Her stepmother hated her on sight. And her stepbrother, Cedric, was an enigma. But nothing would stop Henrietta from becoming the talk of London society.

At all the elegant parties, at fashionable Almack's, at masquerade balls, everyone was agog with the lovely young American girl. There were a few, however, who longed to see her ruined....

Born near Cambridge, Massachusetts, to Pulitzer prize-winning poet Conrad Aiken and his first wife, the writer Jessie McDonald, Jane Hodge was 3 years old when her family moved to Great Britain, settling in Rye, East Sussex, where her younger sister, Joan, who would become a novelist and a children's writer, was born. Their parents divorced in 1929.

From 1935, Jane Hodge read English at Somerville College, Oxford University, and in 1938 she took a second degree in English at Radcliffe College, her mother's alma mater. She was a civil servant for a time, and also worked for Time magazine, before returning to the UK in 1947. Her works of fiction include historical novels and contemporary detective novels. In 1972 she renounced her United States citizenship and became a British subject.

For many years a believer in the right of people to end their own lives, Hodge chose to end her own by means of an overdose in June 2009. The Times obituary (pub. July 25, 2009) stated that she left "a letter expressing her deep distress that she had felt unable to discuss her plans with her daughters without risking making them accessories."