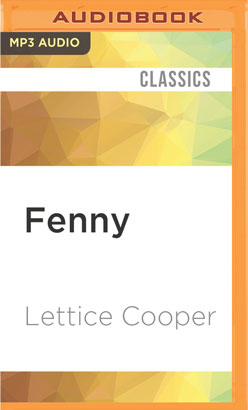 The offer of a summer post as governess to the granddaughter of a famous actress seems a dazzling prospect to Ellen Fenwick, far removed from the fireside teas and prize-givings of her Yorkshire high school. And the Villa Meridiana, surveying the Tuscan hills with their vines and rows of silvery olives, provides a dreamlike setting for the new life she anticipates. Here she tastes her first cocktail, cuts her hair, becomes 'Fenny'—and falls in love.

But in this close-knit expatriate community, relationships are often not what they seem: As fascism threatens the heart of Italy, Fenny is forced to come to terms with both emotional and political realities. Moving from 1933 to 1949, this is a stirring account of Fenny's development and of the experiences that shape the resilient woman she becomes.

Lettice Cooper (1897-1994) was an English writer. She was born in Eccles, Lancashire, on 3 September, 1897. She began to write stories when she was seven, and studied classics at Lady Margaret Hall, Oxford, graduating in 1918.

She returned home after Oxford to work for her family's engineering firm and wrote her first novel, The Lighted Room, in 1925. She spent a year as associate editor at Time and Tide and during the Second World War worked for the Ministry of Food's public relations division. Between 1947 and 1957 she was fiction reviewer for the Yorkshire Post. She was one of the founders of the Writers' Action Group along with Brigid Brophy, Maureen Duffy, Francis King, and Michael Levy and received an OBE for her work in achieving Public Lending Rights. In 1987 at the age of 90 she was awarded the Freedom of the City of Leeds. She never married and died on 24 July, 1994, in Coltishall, Norfolk.