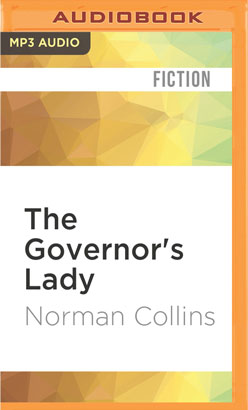 Set in an off-the-map British Colony in Central Africa in the early 1930's, The Governor's Lady portrays a host of interesting characters: young Harold Stebbs, bachelor, newly appointed to the Governor's secretariat in Amimbo; the Governor, Sir Gardnor Hackforth, already something of a Pro-consular legend in the Service, and tipped by The Times for the next Viceroyship; Mr. Frith, the passed-over Acting Chief Secretary, a rather too familiar figure at the bar in the Milner Club; Tony Henley, the A.D.C., who has ultimately to be disowned; Old Moses, the trusted Mimbo butler and key figure in the Residency; the socially irresistible Mr. Ngono; Mr. Talefwa, left-wing editor of the African Independence newspaper, War Drum; and Mr. Das, itinerant legal Counsel called in by the Defence. Then there is the Governor's Lady herself; twenty years younger than Sir Gardnor; somewhat withdrawn from Government life because of an incident that occurred before Harold Stebbs arrived; and already the subject of gossip in European, African and Asian circles alike. There is also Lady Anne's lady-in-waiting, Sybil Prosser, who has her own reasons for discretion.

Norman Richard Collins (1907—1982) was born in Beaconsfield, Buckinghamshire. In his early career he worked in publishing while also writing and publishing several successful novels. In 1941 Collins began working at the BBC. During this time he became known for his innovative programming which included Woman's Hour which still airs today on BBC Radio Four. He rose to Controller of the BBC Television Service, later leaving to co-found what is now ITV after deciding a competitor to the BBC's monopoly was needed. Collins continued to write fiction throughout his busy working life. Although never a full-time writer he was a fluent and prolific author with sixteen titles and two plays to his credit between 1934 and 1981. An autograph edition of twelve of his novels was published during the 1960s.