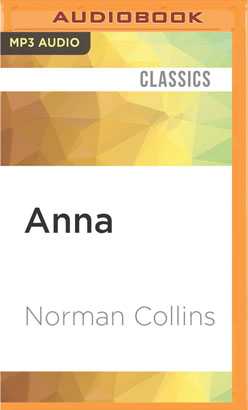 Anna is the story of a woman and an era. Against the background of France and Germany at the time of the Franco-Prussian war of 1870, Norman Collins tells with great brilliance the story of Anna, a beautiful woman.

Born in Rhineland, when she was 19 she fell in love with a French cousin whom she followed to Paris on the eve of the outbreak of war. When he was killed by her compatriots she found herself in besieged Paris, destitute, alone, and a German.

Thrown into prison, she got out only by marrying a middle-aged restauranteur for whom she had no feeling. These are the opening incidents in a novel that is full of incident, of tragedy, and of adventure, and which carries Anna from France to Germany, and finally to England, where at last she finds both peace and happiness. Few historical novels have a wider scope, a more enchanting heroine and a stronger theme. Here is one of the best of Norman Collins' major novels.