Siege of Washington, The 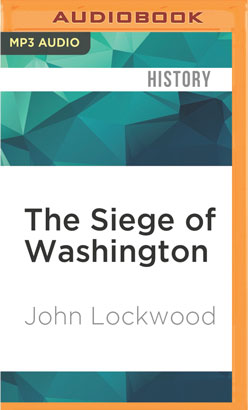 Siege of Washington, The

The Untold Story of the Twelve Days That Shook the Union

On April 14, 1860, the day Fort Sumter fell to Confederate forces, Washington, D.C.—surrounded by slave states and minimally defended—was ripe for invasion. In The Siege of Washington, John and Charles Lockwood offer a heart-pounding, minute-by-minute account of the first twelve days of the Civil War, when the fate of the Union hung in the balance. The fall of Washington would have been a disaster: it would have crippled the federal government, left the remaining Northern states in disarray, and almost certainly triggered the secession of Maryland. Indeed, it would likely have ended the fight to preserve the Union before it had begun in earnest. On April 15, Lincoln quickly issued an emergency proclamation calling upon the Northern states to send 75,000 troops to Washington. The North, suddenly galvanized by the attack on Sumter, responded enthusiastically. Yet one crucial question gripped Washington, and the nation at large—who would get to the capital first, Northern defenders or Southern attackers? Drawing from rarely seen primary documents, this compelling history places the reader on the scene with immediacy, brilliantly capturing the precarious first days of America's Civil War.