Price of Defiance, The 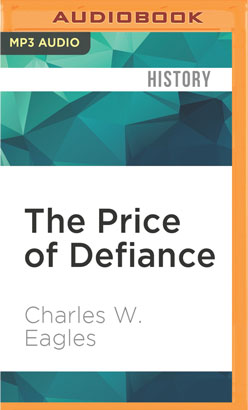 Price of Defiance, The

James Meredith and the Integration of Ole Miss

After fighting a protracted legal battle, James Meredith broke the color barrier in 1962 as the first African American student at the University of Mississippi. The riot that followed his arrival on campus seriously wounded scores of U.S. marshals and killed two civilians; more casualties than any other clash of the civil rights era. To restore order, the Kennedy administration dispatched thousands of soldiers to Oxford.

In The Price of Defiance, Charles Eagles shows that the stunning eruption of violence resulted from the "closed society's" long defiance of the civil rights movement and federal law. Using many previously untapped sources, including FBI and U.S. marshal files, army and university records, and Meredith's personal papers, Eagles provides invaluable background for understanding the historic moment by demonstrating the university's - and Mississippi's - history of aggressive resistance to desegregation from the post-World War II years on, including the deliberate flouting of federal law. Ultimately, the price of such behavior - the price of defiance - was not only the murderous riot that rocked the nation and almost closed the university but also the nation's enduring scorn for Ole Miss and Mississippi.

Eagles paints a remarkable portrait of Meredith himself by describing his unusual family background, his personal values, and his service in the U.S. Air Force, all of which prepared him for his experience at Ole Miss.

Based on extraordinary research, Eagles vividly portrays the culture of segregation and the eventual desegregation of one of the last bastions of racial segregation, Ole Miss.