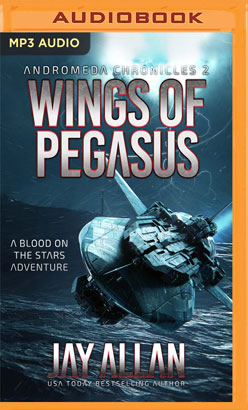 A Blood on the Stars Adventure

A grim, haunted expanse of space, vast light years filled with dead, empty worlds. A dark place, the graveyard of an empire…and a frontier where vast riches can be had by those with the courage - and the luck - to survive.

But trade in old tech is not for the timid. Prospectors face rival crews, ancient imperial security systems, and the ever-present shadow of the Union's dread spy agency, Sector Nine, as they plunge forth in search of artifacts worth vast fortunes.

Andi Lafarge and the crew of Pegasus are among the elite of the strange brotherhood that ventures forth, seeking the remnants of humanity's lost past. She and her people will face the deadliest challenges, fight constant battles, and plunge forth into the darkest corners of the lost region of space.

Pegasus has a new mission, one far more important than even Andi had her crew realize, a search for ancient technology that could determine the outcome of the next Confederation-Union war. To get it, they must travel to a vast ocean world…and they must find what they seek before Sector Nine does.

They will fight, suffer, endure. But they will never fail. Not while Andi Lafarge still draws breath.