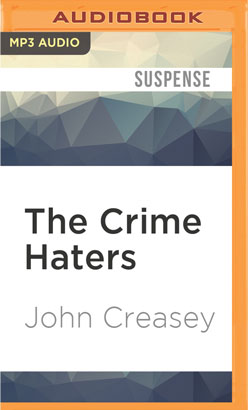 High-speed travel across Europe was not just a revolution for holiday makers and businessmen, it was also a godsend for criminals who wanted to flee the country of their misdeeds. To help in the fight, Patrick Dawlish is appointed to the post of Deputy Assistant Commissioner of Scotland Yard to become Great Britain's representative in the International Brigade against crime. When Dawlish attends his first meeting in The Hague, he finds a common bond between himself and his older counterparts: a deep hatred of organised crime. While they form their plans, a dangerous criminal strikes, and suddenly Dawlish and his new colleagues are thrown into the midst of terrible danger. Into the valley of death they rode…will they make it out to the other side?

Master crime fiction writer John Creasey's near 600 titles have sold more than 80 million copies in over 25 languages across 100 countries under both his own name and more than 20 other pseudonyms. His style varied with each identity and led to him being regarded as a literary phenomenon. Amongst the many series written were ,Gideon of Scotland Yard, The Toff, The Baron, Dr. Palfrey and Inspector West, as JJ Marric, Michael Halliday, Patrick Dawlish and others.