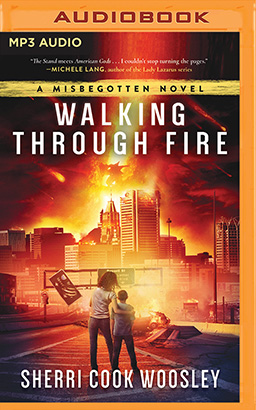 For fans of American Gods, a dark, humorous, and richly written, dystopian fantasy about the unbreakable bonds of family and the power of a mother's love.

The end of the world begins as literal fire rains down from the heavens. Ancient gods are released from their prison, eager to reestablish their long-lost power. But Rachel Deneuve has bigger, more contemporary concerns than a divine war.

Her son Adam is in the middle of a fight against leukemia, and Rachel would much rather battle cancer than gods. But when humans begin picking sides and fighting escalates, their home in Baltimore becomes a war zone.

Desperate to stay away from the carnage—as well as the germ-ridden refugee center—Rachel and Adam flee to their remote mountain cottage, only to find their refuge marred by mutated, grotesque plants and animals. Eventually, the cancerous cells in Adam's body begin evolving as well, threatening his life and forcing Rachel to venture back into the eye of the storm. Left with no other choice but to sacrifice her own freedom for her son's safety, she must become an unwilling warrior in a battle unlike anything seen in millennia, or lose everything she holds dear.