Any Way You Slice It 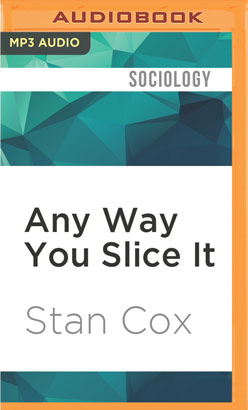 Any Way You Slice It

The Past, Present, and Future of Rationing

Rationing: It's a word and idea that people often loathe and fear. Health care expert Henry Aaron has compared mentioning the possibility of rationing to "shouting an obscenity in church." Yet societies in fact ration food, water, medical care, and fuel all the time, with those who can pay the most getting the most. As Nobel Prize-winning economist Amartya Sen has said, the results can be "thoroughly unequal and nasty."

In Any Way You Slice It, Stan Cox shows that rationing is not just a quaint practice restricted to World War II memoirs and 1970s gas station lines. Instead, he persuasively argues that rationing is a vital concept for our fragile present, an era of dwindling resources and environmental crises. Any Way You Slice It takes us on a fascinating search for alternative ways of apportioning life's necessities, from the goal of fair shares for all during wartime in the 1940s to present-day water rationing in a Mumbai slum, from the bread shops of Cairo to the struggle for fairness in American medicine and carbon rationing on Norfolk Island in the Pacific. Cox's question: Can we limit consumption while assuring everyone a fair share?

The author of Losing Our Cool, the much debated and widely acclaimed examination of air-conditioning's many impacts, here turns his attention to the politically explosive topic of how we share our planet's resources.