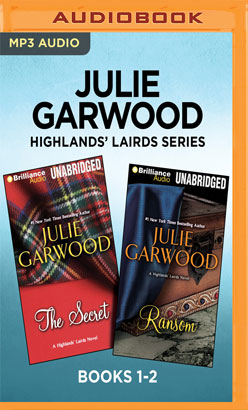 THE SECRET
Judith Hampton was as beautiful as she was proud and loyal. Her dear Scottish friend from childhood was about to give birth, and Judith had promised to be at her side. But there was another reason for the journey from her bleak English home to the Highlands: to meet the father she had never known, the Laird Maclean. Nothing prepared her, however, for the sight of the Scottish barbarian who was to escort her into his land...Iain Maitland, laird of his clan, a man more powerfully compelling than any she had ever encountered. In a spirited clash of wills and customs, Judith reveled in the melting bliss of Iain’s searching kisses, his passionate caresses. Perplexed by her sprightly defiance, bemused by her tender nature, Iain felt his soul growing into the light and warmth of her love. Surely nothing would wrench her from the affection and trust of Iain and his clan...not even the truth about her father, a devastating secret that could shatter the boldest alliance, and the most glorious of loves!

RANSOM
In the dark days after the death of Richard the Lionhearted, lives and lands would fall into upheaval at the hands of a power-hungry British ruler and his violent minions. One victim of the scourge is innocent Gillian, who is a mere child when the cruel and ambitious Baron Alford slaughters her father and tears her family apart. Alford, determined to recover a jeweled box for the despotic King John, is furious when the precious treasure slips through his fingers—only to be lost for more than a decade. Now a beautiful young woman, Gillian finds the key to resolving her past in handsome Scottish chieftains Ramsey Sinclair and Brodick Buchanan. With the cunning and courage of the daring Scotsmen, and with the friendship of a new ally, Bridgid KirkConnell, Gillian at last fights the unscrupulous Baron Alford, laying claim to her home, her family, and her father’s reputation. But in the presence of the mighty warriors, Gillian and Bridgid discover that desire can be a weapon of conquest…betrayal can slay trust in a heartbeat…and the greatest risk of all is surrender—to the deep emotions of unexpected love.