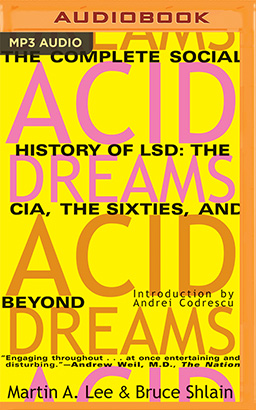 The Complete Social History of LSD: The CIA, the Sixties, and Beyond

By: Martin A. Lee, Bruce Shlain

Few events have had a more profound impact on the social and cultural upheavals of the Sixties than the psychedelic revolution spawned by the spread of LSD. This audiobook for the first time tells the full and astounding story—part of it hidden until now in secret Government files—of the role the mind-altering drug played in our recent turbulent history, and the continuing influence it has on our time. And what a story it is, beginning with LSD's discovery in 1943 as the most potent drug known to science until it spilled into public view some 20 years later to set the stage for one of the great ideological wars of the decade. In the intervening years the CIA had launched a massive covert research program in the hope that LSD would serve as an espionage weapon, psychiatric pioneers came to believe that acid would shed light on the perplexing problems of mental illness, and a new generation of writers and artists had given birth to the LSD sub-culture.

Acid Dreams is a complete social history of the psychedelic counter-culture that burst into full view in the Sixties. With new information obtained through the Freedom of Information Act, the authors reveal how the CIA became obsessed with LSD during the Cold War, fearing the Soviets had designs on it as well. What follows is one of the more bizarre episodes in the covert history of U.S. intelligence as the search for a "truth drug…began to resemble a James Bond scenario in which agents spied on drug-addicted prostitutes through two-way mirrors and countless unwitting citizens received acid with sometimes tragic results."