Baron in France, The 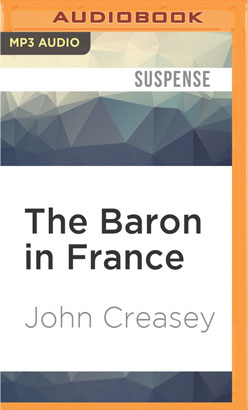 Baron in France, The

When somebody broke into the safe of respected jeweler, Bernard Dale, he obviously hadn't reckoned on any interference. His first mistake. His second mistake - killing Dale - was just downright stupid. For Dale was an old friend of John Mannering - alias the Baron - and Mannering didn't like his old friends getting shot. But although all the evidence pointed firmly at Dale's young partner, Tony Bennet, Mannering wasn't convinced.

With the French Riviera as his first stop, the Baron sets out on a race to find the real killer and prove the innocence of the young man.

Master crime fiction writer John Creasey's near 600 titles have sold more than 80 million copies in over 25 languages under both his own name and multiple other pseudonyms. His style varied with each identity and led to him being regarded as a literary phenomena. Amongst the many series written were 'ideon of Scotland Yard, The Toff, The Baron, Dr. Palfrey and Inspector West, as JJ Marric, Michael Halliday, Patrick Dawlish and others.