Baron Comes Back, The 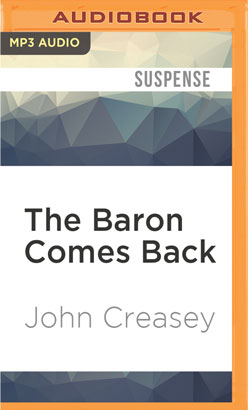 Baron Comes Back, The

Although John Mannering – alias the Baron – had been enjoying his retirement from his ‘Baronial’ activities as a jewel thief, he was nonetheless tempted by the offer of the strange little Frenchman who visited him late one night. So tempted, in fact, that he accepts, and resurrects the Baron in return for a superb diamond. In doing so, Mannering is plunged into the search for a famous collection of precious stones smuggled into the country by an organization which, he suspects, is also dealing in human contraband.

But Mannering, having agreed to help the organization, finds himself in a difficult and dangerous situation; as John Mannering, he is obliged to do all he can to help his old friend Superintendent Bristow, but, as the Baron, he finds himself on the run from the police once more…

Born in Surrey, England in 1908 into a poor family in which there were nine children, John Creasey grew up to be a true master story teller and international sensation. His more than 600 crime, mystery and thriller titles have now sold 80 million copies in 25 languages. These include many popular series such as Gideon of Scotland Yard, The Toff, Dr Palfrey and The Baron. Creasey wrote under many pseudonyms, explaining that booksellers had complained he totally dominated the 'C' section in stores.

Never one to sit still, Creasey had a strong social conscience, and stood for Parliament several times, along with founding the One Party Alliance which promoted the idea of government by a coalition of the best minds from across the political spectrum. He founded the British Crime Writers' Association, which to this day celebrates outstanding crime writing. The Mystery Writers of America bestowed upon him the Edgar Award for best novel and then in 1969 the ultimate Grand Master Award.