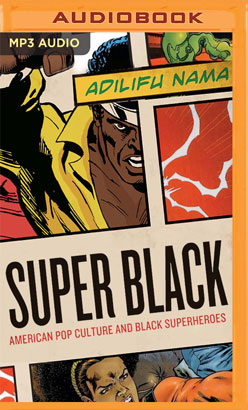 Super Black places the appearance of black superheroes alongside broad and sweeping cultural trends in American politics and pop culture, which reveals how black superheroes are not disposable pop products, but rather a fascinating racial phenomenon through which futuristic expressions and fantastic visions of black racial identity and symbolic political meaning are presented. Adilifu Nama sees the value - and finds new avenues for exploring racial identity - in black superheroes who are often dismissed as sidekicks, imitators of established white heroes, or are accused of having no role outside of blaxploitation film contexts.

Nama examines seminal black comic book superheroes such as Black Panther, Black Lightning, Storm, Luke Cage, Blade, the Falcon, Nubia, and others, some of whom also appear on the small and large screens, as well as how the imaginary black superhero has come to life in the image of President Barack Obama. Super Black explores how black superheroes are a powerful source of racial meaning, narrative, and imagination in American society that express a myriad of racial assumptions, political perspectives, and fantastic (re)imaginings of black identity. The book also demonstrates how these figures overtly represent or implicitly signify social discourse and accepted wisdom concerning notions of racial reciprocity, equality, forgiveness, and ultimately, racial justice.