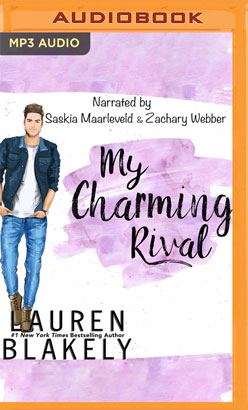 Note: My Charming Rival was previously released as Stars in Their Eyes. It has now been updated and turned into a duet.

To do list: graduate with honors, get into medical school, and snag the most sought-after celebrity photo of all time to cover my tuition. One more thing - resist the hot British guy who's my biggest rival.

But from the first day I run into William on his motorcycle, he makes that difficult, since he's flirty, charming, clever, and keeps trying to convince me to spend the night with him.

Trust me - stripping him down to nothing is on my wish list, but I can't let him get under my skin as I chase cheating directors and stake out clandestine trysts. Yet everywhere I go, my most charming rival is there - is he following me, trying to woo me, or aiming to sabotage my plans?

When I'm offered a brand new ticket to my dreams, I have to decide if I want to team up with the sexiest enemy ever.... Except there's a third option too - and that one's looking mighty appealing - if I'm willing to take a crazy chance.

My Charming Rival is book one. The story continues in My Sexy Rival.