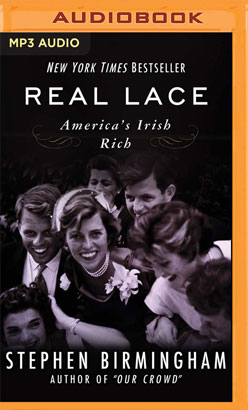 Extraordinary true stories of the Irish in America, their remarkable rise from urban poverty, and the powerful dynasties they engendered

Author Stephen Birmingham, who chronicled the rise of Jewish immigrants to extraordinary wealth and success in Our Crowd, now turns his attention to the Irish. Real Lace tells the colorful and fascinating true stories of America's most renowned Irish-Catholic families. Scions of courageous, driven, and resilient men and women who escaped starvation during Ireland's terrible potato famine in the mid-19th century, they battled their way out of the slums of Boston and New York, overcoming prejudice and poverty to achieve great wealth, fame, and political power.

Here are the remarkable tales of the Kennedys and Cuddihys; the astonishing rise and tragic fall of the McDonnells of Wall Street; thrilling yarns of Floods, Mackays, O'Briens, and other so-called Silver Kings of California; and unforgettable stories about brilliant, if not always scrupulous, Irish politicos who learned how to retain enduring power by perfecting the urban political machine. Birmingham's enthralling history celebrates the pluck, blarney, and unshakeable spirit of a remarkable group of achievers.