War on the Cimarron 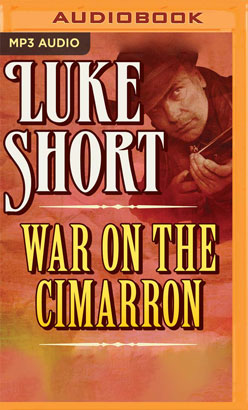 War on the Cimarron

Two cattle punchers share a dream of making it big - until one of them is murdered - in this suspenseful western from an award-winning author.

Frank Christian and Morg Wheelon were going to build something great. After the two veteran cattle punchers saved up enough to start their own outfit, Frank was to ride down to Texas and buy whatever herd he could, then bring them up the Chisholm Trail through Indian country to the rich grasslands of the Cheyenne in Wyoming. Morg would be waiting with the grazing rights in hand. It was a risky plan, but Frank and Morg weren't about to give up their dream.

But when Frank arrives with the herd, Morg has been murdered. The land has been stolen by a gang of outlaws, and a corrupt army officer wants to bring Frank down. Frank has never backed away from trouble, however, no matter how long the odds. To avenge his friend's death and keep their hopes alive, the small-time cowpuncher must become a world-class gunslinger.

A winner of the Levi Strauss Golden Saddleman Award from the Western Writers of America, Luke Short was a master of the frontier epic. War on the Cimarron is one of his most thrilling and unforgettable tales of the Old West.