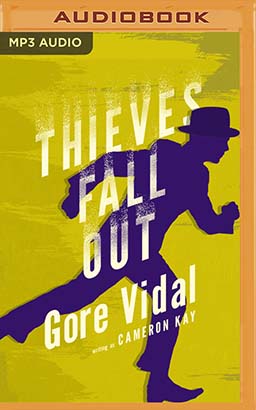 audio performed by: Will Damron

Lost for more than 60 years and overflowing with political and sexual intrigue, Thieves Fall Out provides a delicious glimpse into the mind of Gore Vidal in his formative years. By turns mischievous and deadly serious, Vidal tells the story of a man caught up in events bigger than he is, a down-on-his-luck American hired to smuggle an ancient relic out of Cairo at a time when revolution is brewing and heads are about to roll.

One part Casablanca and one part torn-from-the-headlines tabloid reportage, this novel also offers a startling glimpse of Egypt in turmoil—written over half a century ago, but as current as the news streaming from the streets of Cairo today.